A possible package repository architecture for upgrading with Yum

The new SPMA makes it easy to install new packages, and their dependencies. However, there may be dependencies that are not part of the profile and that might get updated at random times.

We want to avoid such uncontrolled upgrades. One way to avoid them is to do the old-style package management: specify everything in the profile, and fix the dependency hell “manually”. This document proposes a different way to prevent these random upgrades, by taking snapshots of the Yum repositories.

Granted, some packages must stay at the same version independently of the contents of the current Yum repositories. For those we’ll use the old API, and lock down their versions. But I suspect we’ll benefit from letting some dependencies free.

The diagram below shows how we could mirror one repository: 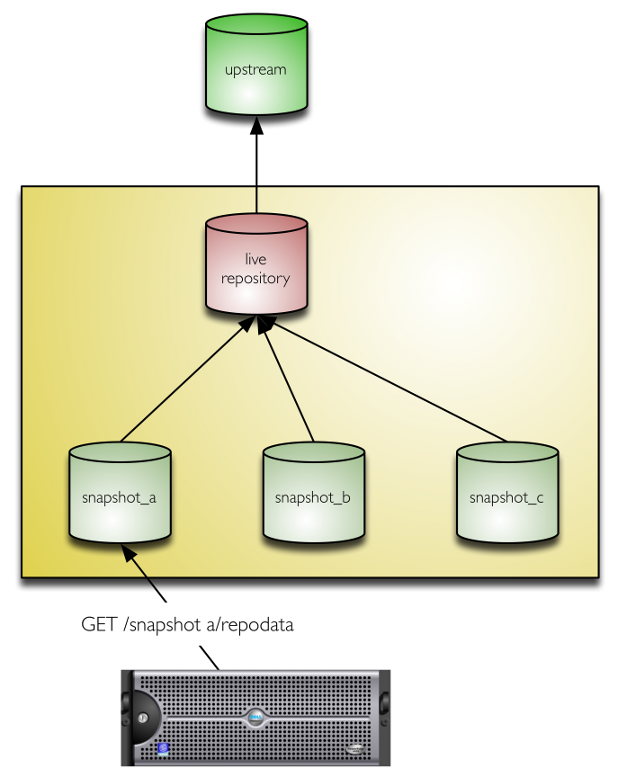 The upstream repository would be mirrored with rsync, reposync, wget, or whatever other tool.

After this mirroring is completed, a snapshot would be taken. You can use use LVM snapshots, store the software in a snapshotting filesystem like ZFS, BTRFS or GPFS, or whatever fits your organisation.

We can map nodes to snapshots in two ways:

Nodes would choose in their profile which snapshot they are “subscribed” to.

The repository templates would specify the URL like this:

where OS_SNAPSHOT_ID is some global variable that reflects the date, or something similar. Rolling an upgrade would mean changing this variable.

This has the disadvantage of requiring editing Pan code for routine operations. But it offers any desired granularity:

In the repository server

Another approach would be to set symbolic links or bind mounts to each snapshot.

The OS_SNAPSHOT_ID variable above would contain any link present in the server. The software managing the mirrors and snapshots would also set up these symlinks according to the organisation’s policy.

Handling these symlinks in a consistent way may not be trivial.

Also, it’s unclear how friendly this would be to caching proxies that users might put in front of the repository.